In 1955, when Oliver Sacks was 22 years-old, his parents decided that he need to be extricated from Oxford University and put in a friendly and supportive community with hard physical work from dawn till dusk. In his words, “My parents thought that a kibbutz would fit the bill, and I too… liked the idea. And so I departed for Ein HaShofet, an “Anglo-Saxon” kibbutz near Haifa…

“I spent the summer… in the kibbutz. I was given a choice: I could work in the tree nursery or with chickens… We got up before dawn, had a large communal breakfast, and then set off for our work.”

In 1997, when I was 20 years-old, I decided, all on my own, to spend my junior year of college in Israel. I was obligated to begin my year with an intensive course in modern Hebrew, and I was given a choice- study in Jerusalem (where I would ultimately spend the rest of the year), or spend the summer on a kibbutz, splitting my time between working and studying. And so I departed for Ein HaShofet, an “Anglo-Saxon” kibbutz near Haifa.

I spent the summer in the kibbutz with 26 other American college students. We could work in one of two factories on site (there were, unfortunately, no available positions in the avocado orchard). We got up before dawn, had a large communal breakfast, and then set out for our work.

This is where I was when I first met Rachel Pearline. A junior at Brown University. Skinny and boisterous. Effusive and disarmingly generous, Rachel was, in some ways, the sun around which the rest of us orbited. We loved her (and some of us fell in love with her).

The kibbutz was well-equipped for American college students with an outdoor pool and a small bar called The Barrel, where students and kibbutzim spent ‘tickets’ on cheap drinks and danced to the latest and greatest techno music (it was also the year of Will Smith’s, Men in Black).

We studied; we worked; we partied. On Friday evenings, we gathered outdoors to welcome the sabbath with an informal “Kab Shab,” breaking the homemade raisin challah prepared by our one, Mennonite student. We traveled around the country; we forged intense friendships with one another. We sometimes argued like brothers and sisters.

At the end of the summer, we moved into the dorms of Hebrew University, along with hundreds of other students who could never understand what they had missed by choosing to do their language intensive in Jerusalem.

We, the American kibbutzniks, were a merry band of outsiders. We stayed close. We shared our first Thanksgiving together away from home. It was epic. Rachel helped me make a pot of rice pudding that would have easily fed a small nation. We ate until we literally fell over one another, napping on the floor and futon. We were light-headed with joy.

During fall break, we decamped to Turkey and Greece, a roving band of brown-haired girls in jeans and bulky backpacks. We drank sweet apple tea in Istanbul and haggled in the bazaar. We sample ouzo in Taksim. We wore trash bags on Rhodes when the heavens opened in a torrent of rain. We found a tiny restaurant in Athens that served a rice pudding that put ours to shame. We saw the ruins at Delphi, but the oracle was silent. 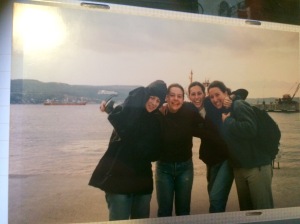 Now that the memory muscles are warm… the stories are flooding in. Trips to Petra; climbing Masada; sleeping under the stars in the Golan. Stealing away to Tel Aviv to get our tongues pierced, thinking we were so rebellious when you could not have found two more responsible young women than Rachel and me.

All this in a span of less than one year. A whole life lived in a span of a few months, or so it seemed at the time. Rachel was my accomplice, my dance partner, my travel companion. And still, she was as much and more to others. Hers was a deep well of joy and grace; there was always enough Rachel to go around.

Thinking we are rebels. Decidedly not.

We passed in and out of each other’s lives after that. Trips to Providence to see her; trips to Georgetown to see me. A West Coast road trip to reunite with the scattered kibbutzniks. The turn of the millennium celebrated in a cramped East Village apartment. It was when we were both in New York, just after college, that I, feeling insecure and unsteady in my independence, grew envious of her easy popularity. Did she recognize me as I pushed her away? Probably. Would she have ever confronted me for my bad behavior? Never.

That she reentered my life as she prepared to leave her own is a sadness that will haunt me for quite some time. Yet who can really be sad when thinking about Rachel? Upon how many thousands did she shine the radiance of her smile? And not just her smile; not just her joy. But her insatiable appetite for the world– places, yes. But people, more.

And her commitment to the Tikkun Olam, the repairing of the world, one patient at a time.

Not unlike Oliver Sacks; himself a doctor, a wanderer, with an insatiable appetite for the world– places, yet. But people, more.

In February of this year, Sacks was diagnosed with multiple metastases of the liver. In an article he wrote for The New York Times, On Learning He Has Terminal Cancer, Sacks writes,

Now I am face to face with dying…

It is up to me now to choose how to live out the months that remain to me. I have to live in the richest, deepest, most productive way I can. In this I am encouraged by the words of one of my favorite philosophers, David Hume, who, upon learning that he was mortally ill at age 65, wrote a short autobiography in a single day in April of 1776. He titled it “My Own Life.”

“I now reckon upon a speedy dissolution,” he wrote. “I have suffered very little pain from my disorder; and what is more strange, have, notwithstanding the great decline of my person, never suffered a moment’s abatement of my spirits. I possess the same ardour as ever in study, and the same gaiety in company.”

Is this not our Rachel? I was not there these past two years. But others were. Tell me that I’m right, that Rachel possessed, throughout her illness, the same ardor in her study, the same gaiety in company. I wasn’t there, but I know I’m right. She died as she lived. In full possession of a gratitude that the most religious of us hope to find in some small measure, but she had in easy abundance.

I have come to believe that they are kindred spirits, each leaving an indelible mark on the world they inhabited with a passion unmatched by anyone, save perhaps one another.

God, filled with mercy, dwelling in the heavens’ heights, bring proper rest beneath the wings of your Shechinah, amid the ranks of the holy and the pure, illuminating like the brilliance of the skies the souls of our beloved and our blameless who went to their eternal place of rest. May You who are the source of mercy shelter them beneath Your wings eternally, and bind their souls among the living, that they may rest in peace. And let us say: Amen.

I am a pastor, licensed clinical social worker, consultant and workshop leader. I live in Brooklyn, NY, (the greatest place ever) with my husband and two children (the greatest people ever). I am an unqualified extrovert and lover of God. I try to live my life with gratitude, wonder, curiosity and intention.
View all posts by RevMcC →
This entry was posted in Personal and tagged Ein HaShofet, Hebrew University, Oliver Sacks, Rachel Pearline, Tikkun Olam. Bookmark the permalink.

2 Responses to For Rachel